Earlier this month, SQream was invited to participate in OpenPOWER Summit Europe. Being the top European event for anyone in the OpenPOWER ecosystem, I was thrilled to take part. The event was extremely high-quality, with a great mix of developers, engineers, executives, and researchers. The quality of the audience was second only to the terrific lineup of top-notch speakers and presentations.

VP Product Ayelet Heyman and I gave a presentation titled IBM POWER9, NVIDIA GPU and SQREAM DB: Tackling the Challenges of Massive Data Analytics. In the session, we took a look at how combining modular components and sophisticated algorithms can deliver fast analytics performance, by limiting the effect of I/O on data-intense queries and models. We showed how arranging data for the GPU, combined with fast GPU compression, metadata mapping and several other techniques can accelerate real database physical operators. We also looked at how the combination of high throughput processors like IBM POWER9 and SQream’s GPU data warehouse delivers an analytics platform that breaks down these barriers. 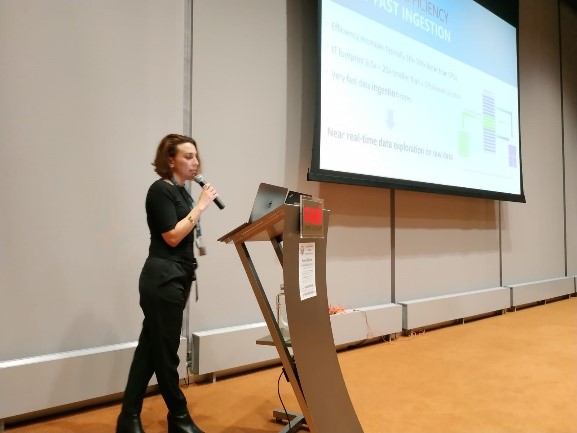 We demonstrated how the increased performance and processing power available in POWER9 combined with SQream’s advanced algorithms for fast data access, and ability to join any table on any keys without manual indexing or pre-aggregating enables organizations to query much larger data stores, much faster. We also looked at how high throughput compute devices, like IBM POWER9 and NVIDIA Tesla GPU accelerators, can handle data significantly faster than other data solutions. This ability, coupled with improved I/O through clever software techniques, can not only reduce latency for the AI/ML/DL pipeline, but also operate at much larger scales.

Love this quote from the @SQreamTech session at the #OpenPOWERSummit:
“IBM call it NVlink, we called it the missing link”
?

During the presentation, I introduced SQream DB for IBM POWER9. The powerful trinity of SQream DB, IBM POWER9 and NVIDIA GPUs results in advanced performance, with SQL query performance improvements of up to 150% versus GPU-equipped x86 servers, with reduced cost and systems complexity. The solution provides users with a super-charged combination of IBM’s powerful processor and SQream’s DB data warehouse for unparalleled speed, performance and scale, while enabling significantly improved analytics.

OpenPOWER Summit Europe is a very high quality event, and I highly recommend it for companies already on POWER9 as well as those considering the move.

David Leichner is the CMO at SQream Technologies. David started his career as a database and network programmer at leading US corporations Salomon Brothers and TRW. Since moving to the vendor world, David has held technical and executive management positions at Information Builders, Magic Software and BluePhoenix. He has been involved in bringing solutions to market on IBM infrastructure since the mid-90s. At SQream, David is responsible for creating and executing the strategy that forms the foundation for SQream’s global market penetration.